Imagine your mobile tracking mount having the same robotic capability of your AHE mobile/ trailer dome on the fixed tower: 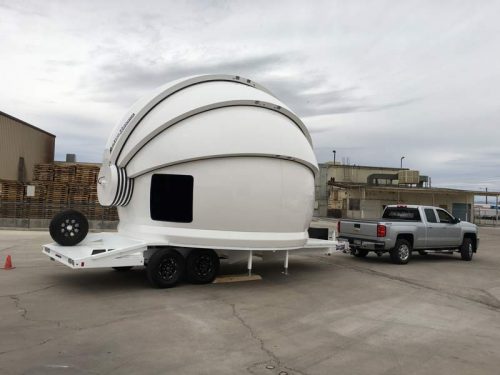 We have designed a trailer that incorporates the best ideas for transporting a tracking mount on the range and adds an AHE dome for environmental protection. The trailer will accommodate the 12.5 or 16 foot class domes and is most suitable for the “X” models where all the shutters can be raised to vertical for travel on public roads. It has folding wings that support the fully deployed dome but the system can collapse to eight feet wide for highway or urban travel. The fully deployed dome is too wide for public roads but with wide wheel stance and torsion/air-ride suspension you can transport an operational 16Dash1 or 16-X dome all over an unprepared range at moderate speeds. In addition to the silky suspension the tracking mount is also supported on shock mounts for transport. It features a pintle hitch for rough terrain but it can be towed with standard pickup and has a great turning radius. Onsite anchor the wings, hitch and stern and you are ready for any kind of wind. Collapse the dome, raise the wings and the highway awaits. The trailer design incorporates a pedestal for the tracking mount that is lowered to the ground or pier on cables so the telescope is isolated from the trailer when in operation. The cables and massiveness of the steel pedestal gave rise to the tongue-in-cheek name “Chandelier”. We tested a total load of 5500 lb. (i.e. the Chandelier and payload) but the components of the system are engineered to lift much more. The Chandelier is locked down on shock mounts and laterally stabilized for safe transport.